Migration from the Philippines to the United States began in the late 19th century and has been driven in large part by longstanding political, military, and educational ties between the two countries, including a decades-long period of U.S. colonization. There have been several waves of immigration, but the pace escalated towards the end of the 20th century. In 2018, just over 2 million Filipinos lived in the United States, accounting for 4.5 percent of the country’s 44.7 million immigrants. This was a quadrupling since 1980 when there were 501,000 Filipino immigrants in the United States. The Philippines was the second-largest origin country for immigrants in 1990 and throughout the first decade of the 21st century but was overtaken by India and China in 2010. Today, Filipino immigrants represent the fourth-largest origin group after the foreign-born from Mexico, India, and China. The first wave of Filipino immigrants arrived in the United States following the U.S. annexation of the Philippines in 1899. Many Filipinos came to work in agriculture, primarily on fruit and vegetable farms along the West Coast and sugarcane plantations in Hawaii, though some came to the United States to obtain an education. The 1934 Tydings-McDuffie Act put the Philippines on track to independence, which it achieved eight years later, but also imposed a limit of 50 Filipino immigrants per year. This new law, combined with the Great Depression, brought immigration from the Philippines to a trickle. However, World War II reopened migration channels both for family and work-related purposes. First, American soldiers stationed in the Philippines came home with their Filipino wives after the war. Second, some Filipinos came to the United States as military recruits. Finally, some Filipinos who came to study and obtain professional experience in the healthcare field remained in the United States after completing their training. In more recent years, the combination of the removal of national-origin quotas in U.S. immigration law in 1965, on the one hand, and Filip ino policies that encouraged labor emigration, on the other, contributed to even higher levels of migration from the Philippines to the United States. The Filipino immigrant population increased fivefold from 105,000 to 501,000 between 1960 and 1980. From there, it nearly tripled to almost 1.4 million by 2000. 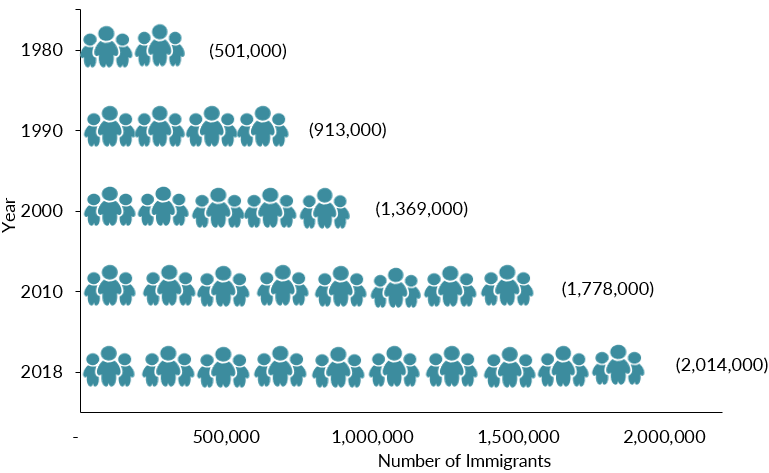 Click here to view an interactive map showing where migrants from the Philippines and other countries have settled worldwide.

Today, most Filipinos in the United States who obtain lawful permanent residence (LPR status, also known as getting a green card) do so through family reunification channels, either as immediate relatives of U.S. citizens or through other family-sponsored channels. Many also get green cards through employment preferences. Meanwhile, Filipinos are more likely than other immigrants to have strong English skills and have much higher college education rates than the overall foreign- and U.S.-born populations. They are also more likely to be naturalized U.S. citizens than other immigrant groups, have higher incomes and lower poverty rates, and are less likely to be uninsured.

Using data from the U.S. Census Bureau (the most recent 2018 American Community Survey [ACS] as well as pooled 2014-18 ACS data) and the Department of Homeland Security’s Yearbook of Immigration Statistics, this Spotlight provides information on the Filipino immigrant population in the United States, focusing on its size, geographic distribution, and socioeconomic characteristics.

The U.S. Census Bureau defines the foreign born as individuals who had no U.S. citizenship at birth. The foreign-born population includes naturalized citizens, lawful permanent residents, refugees and asylees, legal nonimmigrants (including those on student, work, or other temporary visas), and persons residing in the country without authorization.

The terms foreign born and immigrant are used interchangeably and refer to those who were born in another country and later emigrated to the United States.

Data collection constraints do not permit inclusion of those who gained Filipino citizenship via naturalization and later moved to the United States.

Click on the bullet points below for more information:

Distribution by State and Key Cities

In the 2014-18 period, immigrants from the Philippines were highly concentrated in California (43 percent), followed distantly by Hawaii (6 percent). The next four most populous states—Texas, Illinois, New York, and Nevada—were home to 18 percent of the Filipino population collectively. The top four counties by Filipino concentration were Los Angeles and San Diego counties in California, Honolulu County in Hawaii, and Clark County in Nevada. Together these counties accounted for 25 percent of Filipinos in the United States.

Figure 2. Top States of Residence for Filipinos in the United States, 2014-18 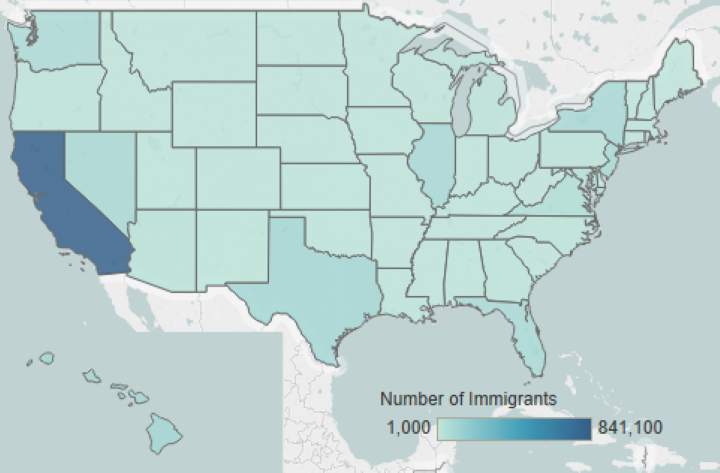 Note: Pooled 2014-18 ACS data were used to get statistically valid estimates at the state level for smaller-population geographies. Not shown is the population in Alaska, which is small in size; for details, visit the Migration Policy Institute (MPI) Data Hub for an interactive map showing geographic distribution of immigrants by state and county, available online.
Source: MPI tabulation of data from U.S. Census Bureau pooled 2014-18 ACS.

As of 2014-18, the U.S. cities with the largest number of Filipinos were the greater Los Angeles, San Francisco, and New York metropolitan areas. These three metro areas accounted for about 31 percent of Filipinos in the United States.

Figure 3. Top Metropolitan Areas of Residence for Filipinos in the United States, 2014-18 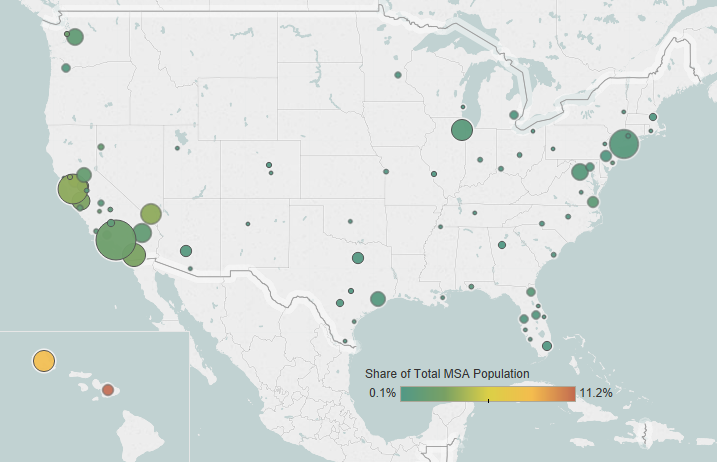 Click here for an interactive map that highlights the metropolitan areas with the highest concentrations of immigrants from the Philippines and other countries.

Note: Limited English Proficient (LEP) refers to those who indicated on the ACS questionnaire that they spoke English less than “very well.”

Figure 4. Age Distribution of the U.S. Population by Origin, 2018 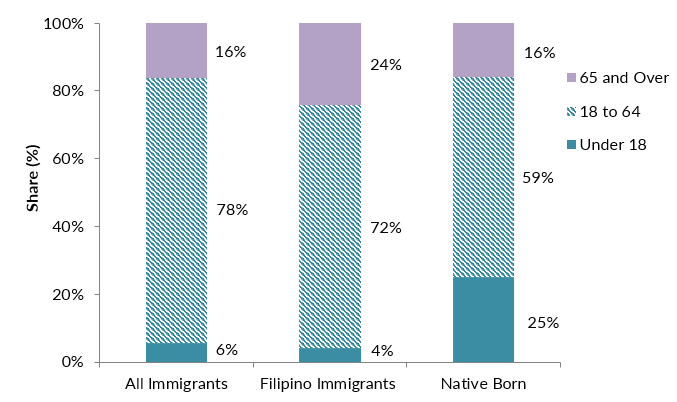 Note: Numbers may not add up to 100 as they are rounded to the nearest whole number.
Source: MPI tabulation of data from the U.S. Census Bureau 2018 ACS.

Click here to view an interactive chart showing the age and sex distribution of the top immigrant groups, including Filipinos.

Filipinos ages 25 and older have much higher education rates compared to both the native- and overall foreign-born populations. Almost half of Filipino immigrants (49 percent) reported having at least a bachelor’s degree in 2018, compared to 33 percent of the U.S. born and 32 percent of all immigrant adults.

Figure 5. Employed Workers in the Civilian Labor Force (ages 16 and older) by Occupation and Origin, 2018 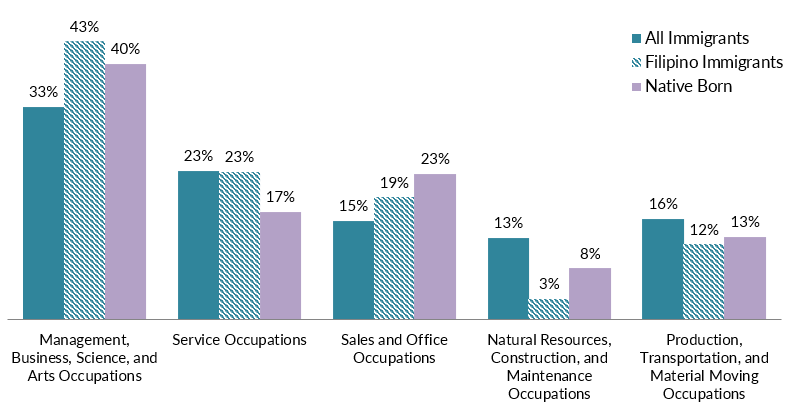 Filipinos overall have significantly higher incomes compared to the total foreign- and native-born populations. In 2018, households headed by a Filipino immigrant had a median income of $93,000, compared to $60,000 and $62,000 for all immigrant and U.S.-born households, respectively.

In 2018, Filipino immigrants were less likely to be in poverty (6 percent) than immigrants overall (15 percent) or U.S.-born persons (13 percent).

Compared to all immigrants, Filipinos are slightly more likely to have arrived before 2000. The largest share of Filipinos, approximately 56 percent, arrived prior to 2000, followed by 24 percent coming between 2000 and 2009, and 20 percent in 2010 or later (see Figure 6).

Figure 6. Immigrants from the Philippines and All Immigrants in the United States by Period of Arrival, 2018 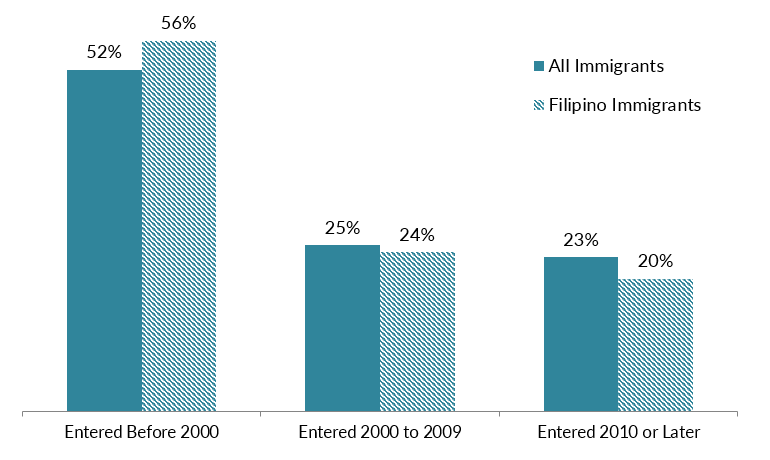 Note: Numbers may not add up to 100 as they are rounded to the nearest whole number.
Source: MPI tabulation of data from the U.S. Census Bureau 2018 ACS.

In fiscal year (FY) 2018, the Philippines was the sixth-largest country of origin for new permanent residents. Approximately 47,300 of the 1.1 million new LPRs were from the Philippines. Most Filipinos who obtain green cards do so through family reunification channels. In FY 2018, 81 percent of the 47,300 Filipinos who received a green card did so as either immediate relatives of U.S. citizens or other family members, a much higher share compared to 63 percent of all new LPRs (see Figure 7).

Figure 7. Immigration Pathways of Filipinos and All Immigrants in the United States, 2018 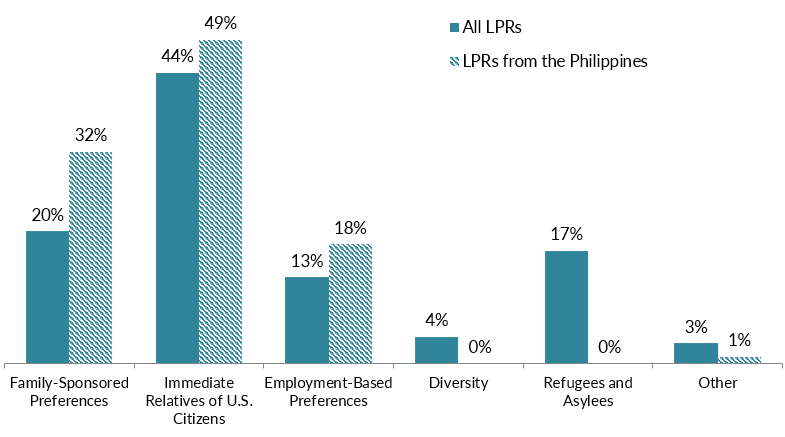 Notes: Family-sponsored: Includes adult children and siblings of U.S. citizens as well as spouses and children of green-card holders. Immediate relatives of U.S. citizens: Includes spouses, minor children, and parents of U.S. citizens. Diversity Visa lottery: The Immigration Act of 1990 established the Diversity Visa lottery program to allow entry to immigrants from countries with low rates of immigration to the United States. The law states that 55,000 diversity visas in total are made available each fiscal year. Individuals born in the Philippines are not eligible for the lottery.
Source: MPI tabulation of data from Department of Homeland Security (DHS), 2018 Yearbook of Immigration Statistics (Washington, DC: DHS Office of Immigration Statistics, 2020), available online.

Although the vast majority of Filipino immigrants in the United States are legally present, approximately 313,000 were unauthorized in the 2012-16 period, according to Migration Policy Institute (MPI) estimates, comprising approximately 3 percent of the 11.3 million unauthorized population.

MPI also estimated that approximately 26,000 Filipino unauthorized immigrants were immediately eligible for the Deferred Action for Childhood Arrivals (DACA) program when it was introduced in 2012. However, as of March 2020, only 3,270 Filipinos were among the 643,600 active participants, according to U.S. Citizenship and Immigration Services (USCIS) data.

Filipinos have high health insurance coverage rates compared to all immigrants. In 2018, just 6 percent of immigrants from the Philippines were uninsured, a rate similar to the U.S.-born population, compared to 20 percent of all foreign born. Filipino immigrants were also more likely to be covered by private health insurance than the overall foreign- and U.S.-born populations (see Figure 8).

Figure 8. Health Coverage for Filipino Immigrants, All Immigrants, and the Native Born, 2018 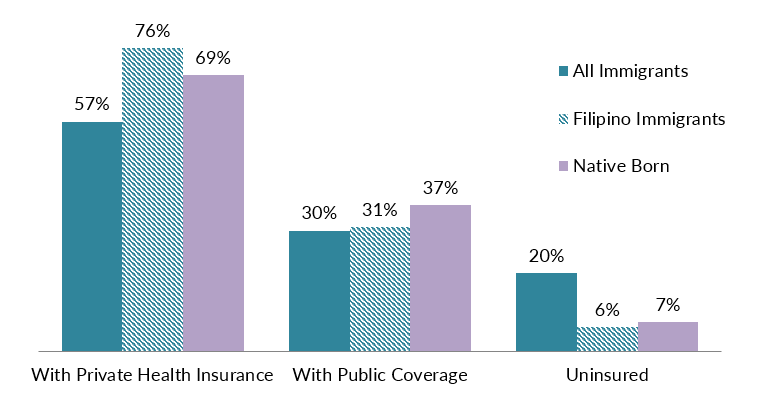 Note: The sum of shares by type of insurance is likely to be greater than 100 because people may have more than one type of insurance.
Source: MPI tabulation of data from the U.S. Census Bureau 2018 ACS.

The Filipino diaspora in the United States was comprised of more than 4.3 million individuals who were either born in the Philippines or reported Filipino ancestry or race, according to tabulations from the U.S. Census Bureau 2018 ACS.

In 2019, Filipinos living abroad sent more than $35 billion in remittances to the Philippines via formal channels, according to the World Bank’s estimate. Remittances more than doubled in the past decade and represented about 10 percent of the country’s gross domestic product (GDP) in 2019. 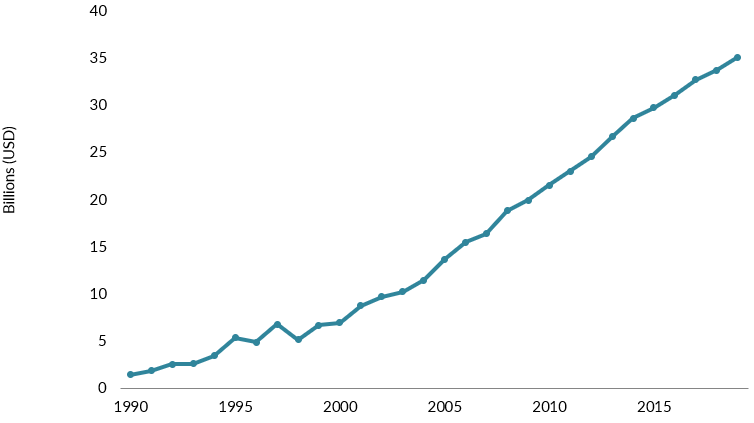 Click here to view an interactive chart showing annual remittances received and sent by the Philippines and other countries.